Warning: count(): Parameter must be an array or an object that implements Countable in /home/tibbies/public_html/wp-content/plugins/arconix-faq/includes/metabox/init.php on line 746
 Pedigrees
Home Pedigrees 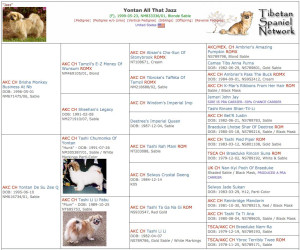 The Tibetan Spaniel Pedigree Database is provided for personal use only.

Use of web harvester robots or any other means of copying the Tibetan Spaniel Pedigree Database for any commercial purpose is expressly prohibited.

According to Animal Health Trust…

Progressive Retinal Atrophy (PRA) is a well-recognised inherited condition that many breeds of dog are predisposed to.  The condition is characterised by bilateral degeneration of the retina which causes progressive vision loss that culminates in total blindness.  There is no treatment for PRA, of which several genetically distinct forms are recognised, each caused by a different mutation in a specific gene.  The various forms of PRA are typically breed-specific, with clinically affected dogs of the same breed usually sharing an identical mutation… Geneticists at the Kennel Club Genetics Centre at the Animal Health Trust have discovered a mutation that causes a form of progressive retinal atrophy (PRA) in Tibetan Spaniels. We are calling this form of the disease PRA3 to distinguish it from other, genetically distinct, forms of PRA that are caused by different mutations… It is advisable for all breeding dogs to have their eyes clinically examined by a veterinary ophthalmologist prior to breeding and throughout their lives, with at least one examination occurring when the dog is at least 8 years of age, so that any cases of PRA caused by additional mutations can be detected and that newly emerging conditions can be identified.

Search for a Pedigree

Help us with the ongoing expense of hosting fees in order to continue to provide you with free access and use of the Tibetan Spaniel Pedigree Database. We're asking for a $5.00 donation. Your help is greatly appreciated.

Note: Your statement will show payee as "Web Design by Jan. LLC". Jan Allinder has been paying for hosting fees for Tibbies.net since 1996.